Wednesday was set as closing day — the day we take ownership of the resort. Ryan had been working with a lawyer from Belize City for months, putting together the contracts and sorting out the details of the purchase with the former owner. Our lawyer, Steve, planned to leave Belize City at 11am, arriving in Hopkins around 2pm for the signing. But as we are learning, things in Belize tend to happen at their own pace. Steve ended up getting a late start and arrived around 5pm. We decided to put off the signing until the next day because we also had a bit of a party to throw.

The previous owners, Tony and Angela, know all of the other business owners in the resort area, as well as many other ex-pats and locals that they do business with. They wanted to say goodbye and also introduce us as the new owners by throwing a meet and greet at the hotel restaurant. I can’t say I have many pictures from the evening, because I was busy meeting people, So Many People. It was overwhelming in a couple of ways.

First, there are so many reasons for person to be here and so many past lives they are coming from. There are retirees who are relaxing in Belizean paradise. There are professional chefs who have opened their restaurant here — taking a risk on a small but growing restaurant culture. And there are people who worked in a certain profession in their home country, but have chosen to live a slower lifestyle and take on new careers that more closely follow their passion. I met a couple who used to work in a creative agency as professionals behind a desk. Now he is a photographer and she is a yoga instructor. They are both likely the first to provide their specific type of service in this area. It was really interesting to meet everyone and find out what they are doing here. But there were so many conversations. I just hope I can remember some of what I learned (including names!)

Second, EVERYBODY had advice. Ryan and I have only been here a handful of days and we have a lot to figure out. I found myself determined to listen more than talk and trying to evoke my humility. In other words: taking in all the advice, not getting ruffled when one person called me “naive”, and asking a lot more questions about the ex-pats’ lives rather than telling my own story. Everybody was excited to meet us, and based on where they’d come from and what they’d experienced here, everyone had a slightly different viewpoint. Certainly different from going to a party in NYC where backgrounds and outlooks would tend to be more similar.

I asked a lot of people about the schools here because that is a decision I will have to make soon. There are three schools within a 25 minute drive from our hotel. One is in Hopkins, one in Sittee River and one in Silk Grass. The one in Hopkins is the closest and for a while, the only one I knew of. From all of the wisdom, experience and advice I’ve taken in over the past week, we are hoping to send the kids to Sittee River which is a school in a very small village of around 300 people. The school is supposed to be on the average a bit better because of the smaller classroom sizes and more attentive teachers. We’ve been told the school in Hopkins proper has crowded classrooms, and teachers that let the less motivated kids just do what they want. We’ve also heard that it is a bit “rough”. Ugh, nice non-descript scary word! Digging deeper, some people said there is bullying and some say its just hard to be an outsider and fit in. But we should try it an see for ourselves! I don’t think I want to see for myself. 🙁

After the party, we entered Thursday and tried to get on with the closing. We spent the morning signing papers and then realized we needed to visit the DMV in Dangriga (45 min drive) to transfer ownership of the resort vehicles (used for airport pickups and tours). So we piled in the car…the outgoing owners, new owners, lawyer and the kids. We had lunch and headed to Dangriga. However, we were missing an official stamp for our new business. We are leaning that stamps, as well as doing everything in person is very important here. So we could not in fact complete the transfer! We would have to come back the next day. 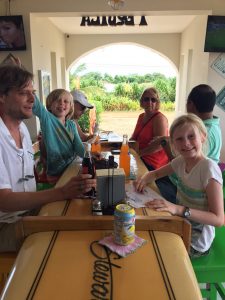 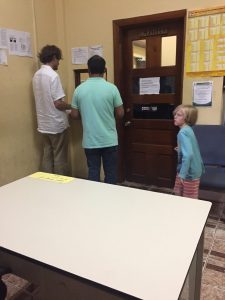 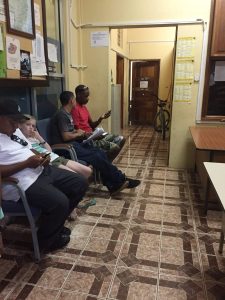 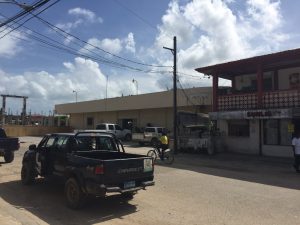 Nonetheless, we were closer to completing the purchase and of course learning so much at every step forward and step back.