After living here for a year, there are still a few tours offered by our resort that I have not taken myself. I’ve heard so many amazing things about the Garifuna Immersion tour from day one, so this past summer I decided to take the kids. 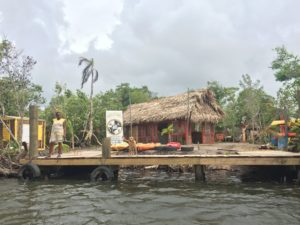 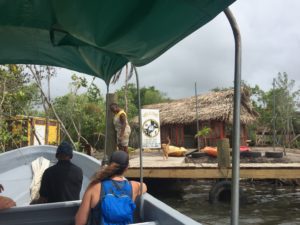 The Garifuna Immersion is run by Palmetto Grove, a lodge and event space located on the far north end of town, just across the water. The immersion tour is about 3 hours long, and involves learning the history of the Garifuna people, culture and making a traditional Garifuna meal, hudut, from scratch (starting with breaking open coconuts with a wooden steak!)

In order to get to Palmetto Grove, we drove to the very very north end of town, where we were picked up in a small boat. The boat ride was less than 5 minute; we just needed to cross the lagoon to the bank on the other side. 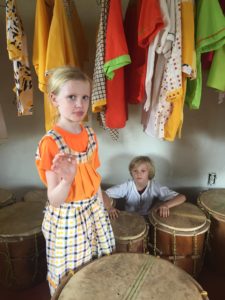 Uwahanie, the owner, was our host. She greeted us at the dock and led us into a small thatched roof room where we were encouraged to dress up in traditional Garifuna clothing. After the kids and I picked our outfits, Uwahanie showed us various cooking tools that were on display throughout the room. All of the tools were made by hand as they would’ve been long ago. For grating, she showed us a wooden board with rocks pressed into it. The tip of the small rocks were raised just enough to help tear into the food that you are trying to grate. After learning about the cooking tools, she led us around the property and showed us some artwork depicting the history and customs/ceremonies of the Garifuna. We eventually arrived in a large room with a long table and hearth for cooking. Outside this kitchen building were several wooden stakes stuck in the ground. Uwahanie showed us how to use the wooden stake to pierce and carve the husk off of the coconut so we could reach the center. We then used the back of a large butcher knife to, “thwack”, hit the coconut inner shell and reach the meat. I’ve heard about this part of the tour by a couple guests. One guest who brought his son to the tour said his son loved it so much because he got to handle a really big knife!  This was certainly a thrill for my kids as well. It made me nervous, because I’ve seen my kids trip over their own two feet. But I took a deep breath and let them enjoy the moment and we all emerged nick free. 🙂 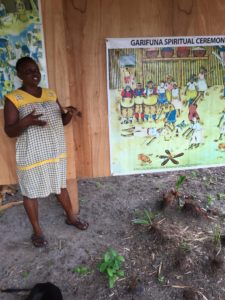 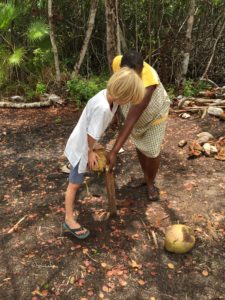 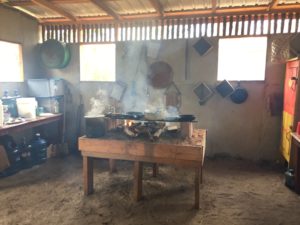 After getting to the center of the coconut, we used a metal grater (a circular grater fixed to the table like a vice) to get the coconut out of the shell and shredded. We mixed the shredded coconut with hot water and squeezed the coconut with our fingers. This produced coconut milk. We also mashed plantains in a giant mortar and pestle. Meanwhile, Uwahanie cooked some fish over the open hearth and finished up making the broth from our coconut milk.  We all selected little bowls made from carved casaba and filled them with broth, fish and smashed plantains 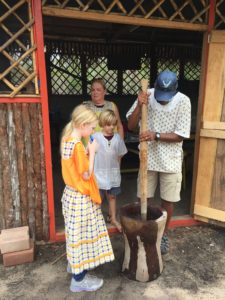 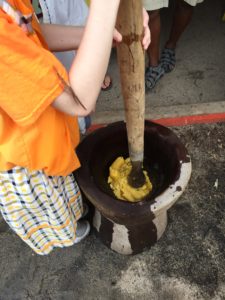 It was so much fun to make the meal from scratch and really understand the effort going into it. Hudut is still cooked today and apart from using more modern tools, its very much the same process.

After learning about cooking, we moved on to another open air space to learn about drumming. We each received either a primary or secondary drum and learned the associated parts to several songs. We learned punta and paranda beats. There were quite a few of us — 4 guests from Beaches and Dreams plus me and the kids, and our instructor. So it made for a nice sound a decent drum circle. 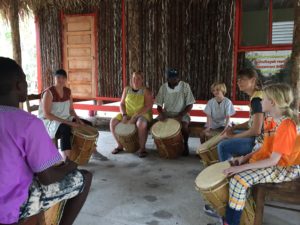 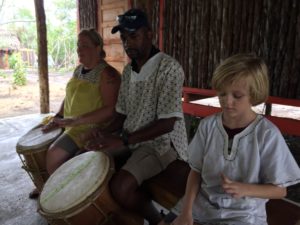 Thats it! We spend about 3 hours there, but it flew by. Each part of the tour was interesting and interactive. My kids had a lot of fun. I think they liked the coconut peeling and grating the best, though Rex also LOVED the drumming and wants a drum of his own now.